DWS were recently contacted by Ivor Mitchelmore, former Chief Biomedical Scientist at Luton & Dunstable Hospital and a user of DWS products since 1980. Ivor and two ex-colleagues: Hilary Rogers and Ruth Parry from the microbiology lab at Luton & Dunstable, were planning a trip to Khristiya Seva Niketan (KSN), a mission hospital in Sarenga, West Bengal, India. Their aim: to help the existing pathology lab set up a limited microbiology service, which the local team would be able to continue after their departure.

The KSN hospital (location indicated by red triangle on above map) was set up just over 100 years ago to serve the poor - mainly tribal people - who live in this very rural location west of Kolkata. Ivor planned to stay for seven weeks, and asked if DWS would donate an anaerobic jar to aid in their efforts. Of course we were more than happy to oblige; contributing one of our 9 plate, stainless steel jars. Ivor and his colleagues have now returned to the UK after a very successful trip, and he has provided us this fascinating update on their progress, recorded half way through their visit:

“It is nearly three and a half weeks since myself, Hilary and Ruth flew out of Heathrow Airport on our way to a small mission hospital in rural India. The hospital already has a small pathology laboratory offering a basic range of haematology and biochemistry tests, but no microbiology culture service. Having had a disappointing experience last year, when I spent the first three months at KSN trying to help them set up a microbiology service, I was determined to go better prepared this time. The three of us all had our maximum luggage allowance of 40kg each, and well over half of this was due to the generous donations of equipment and consumables from both trade companies and local laboratories. I had earlier shipped out a bench top autoclave, purchased from The Rodwell Autoclave Company, which has proved invaluable. 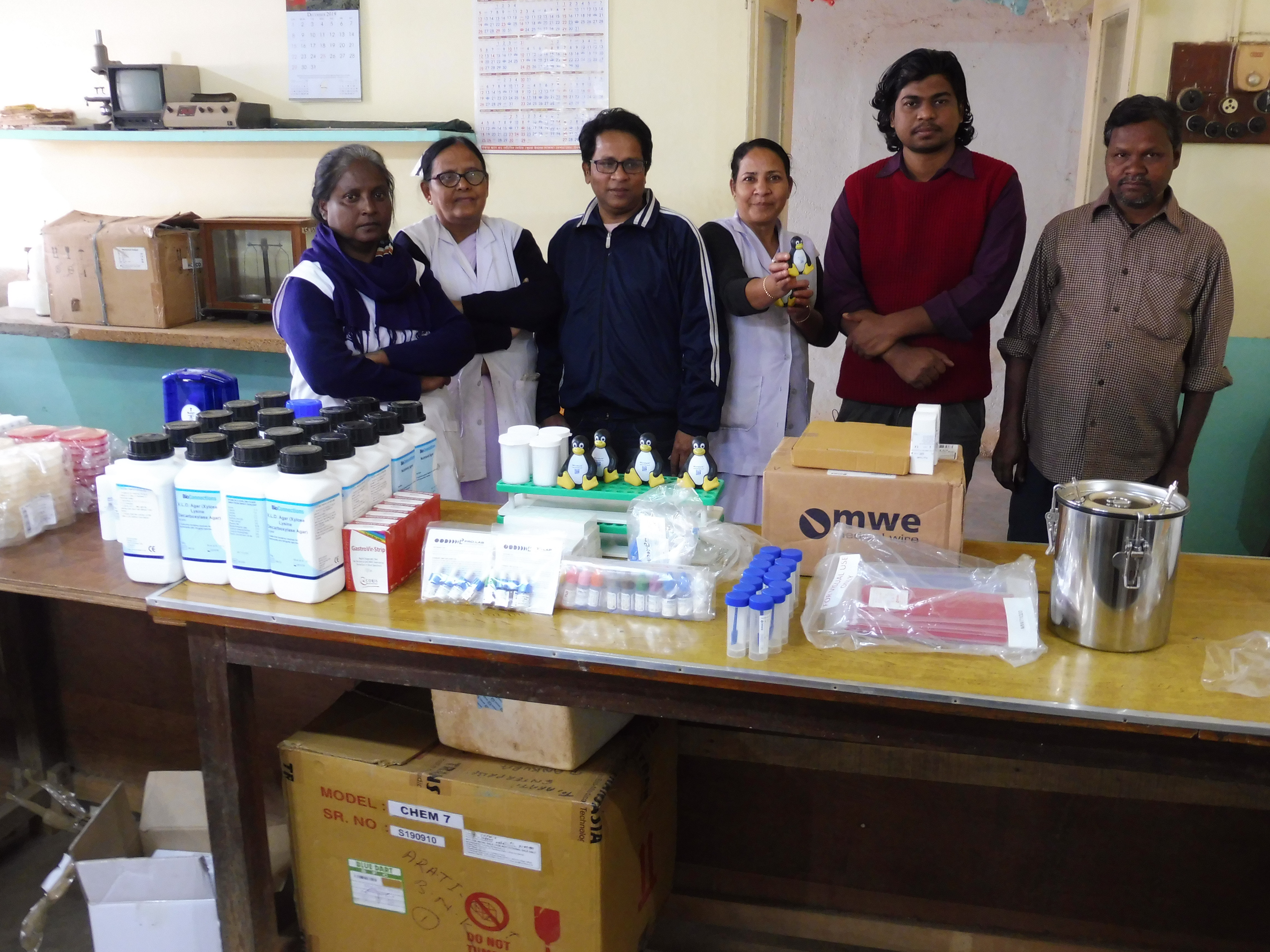 Hilary had recently retired after 37 years continuous service at the Luton and Dunstable Hospital, and is an expert in media production (not to mention anything else to do with bacteriology, mycology and parasitology). Within a few days we had a fridge full of culture media, thanks to the donation of dehydrated culture media from BioConnections, and several 1 Litre bottles supplied by the Luton lab. This was almost entirely produced by the local staff under Hilary’s watchful eye. I was thankful that we did not have to resort to bleeding the staff to make the blood agar plates, but instead managed to obtain an expired pack of blood from a blood bank. We had taken a few blood agar and Mueller Hinton agar plates with us, courtesy of Watford General Hospital laboratory, and immediately set up nose swabs from the staff, in the hope of obtaining a Staph. aureus control. We drew a blank there, but then had the idea of swabbing all the 25 first year nursing students attached to KSN, using swabs supplied by Medical Wire. This turned into a lab-based training session for the students, who have a large microbiology unit in their first year. It was great fun as they took each other’s nose swabs and then handed them to Ruth for plating out. Sure enough, when the students came back the next day, several of their nose swabs had grown Staph. aureus, as confirmed by the Staph Latex Kit and Rabbit Plasma supplied by Pro-Lab Diagnostics. One girl was horrified to discover she had Staph. aureus in her nose, and we tried to explain to her that it was normal for some people! 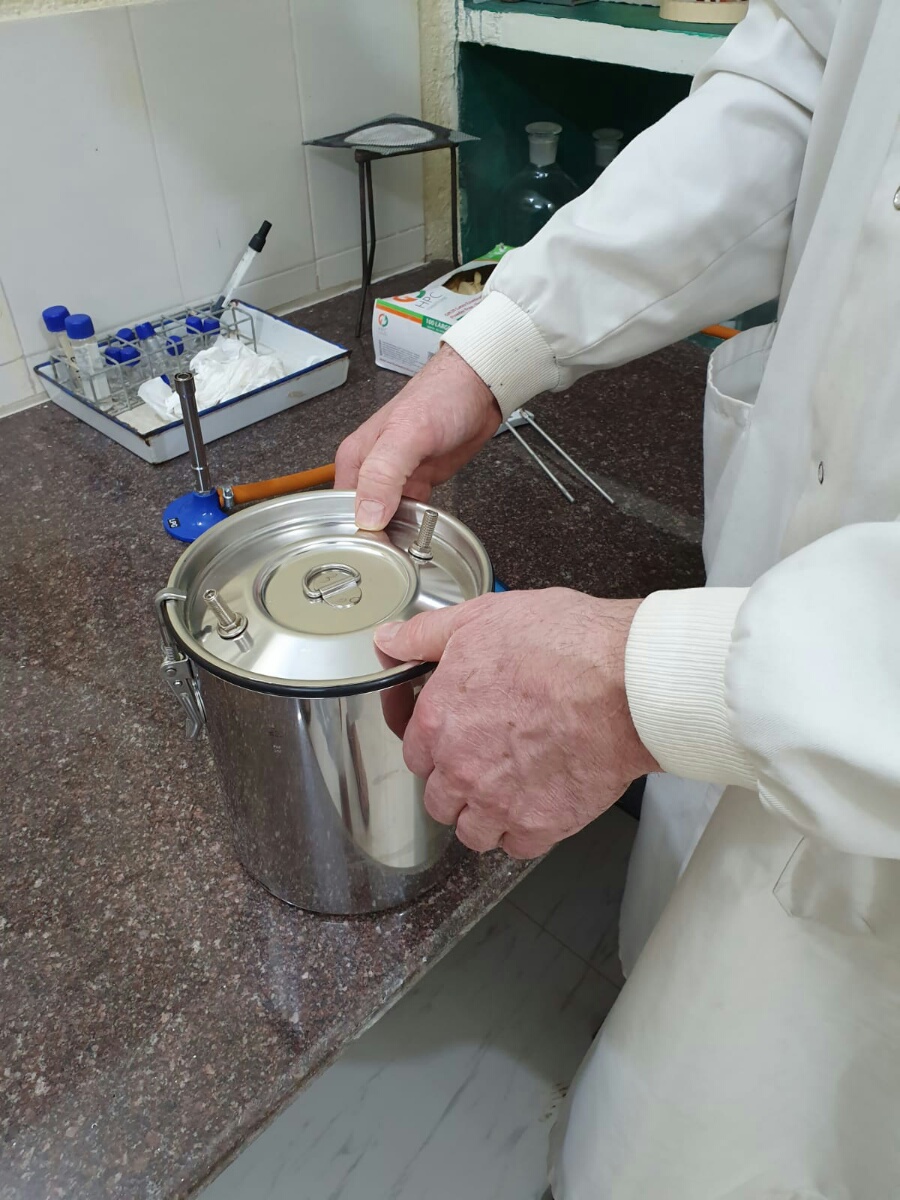 For training purposes we inoculated a rectal swab onto a range of plates, which served to demonstrate Proteus swarming, and provided a Pseudomonas and a lactose fermenting coliform as control organisms. We also isolated our first anaerobic bacteria, using the jar supplied by Don Whitley Scientific Ltd. To create a CO2 enriched atmosphere, we used a candle in a sealed biscuit tin. With the control organisms we had gathered, Ruth organised training the staff in making and reading Gram-stained films. With limited resources, this will be a key step in identifying their isolates; no MALDI-TOF here!

Probably the most satisfying result to date, was when the Obstetrics and Gynaecology doctor sent a urine from a patient visiting the weekly antenatal clinic. The sample had a high white cell count and the following day we had grown what looked like a fully sensitive E.coli. This was entirely processed by local staff and the patient was started on Nitrofurantoin, but later admitted and changed to IV Gentamicin. She made a complete recovery. The antibiotic discs and dispenser were supplied by Mast Group Ltd.

As well as the practical work in the laboratory, every afternoon I have been giving a half hour powerpoint presentation, explaining the theory behind what they have been learning at the bench. I don’t speak much Bengali, so there is a language barrier, but all of them speak some English and the younger staff members are very good at explaining things to the others, where necessary.

Finally, today we had our first opportunity to try out the Streptococcal grouping kit, also supplied by Pro-Lab Diagnostics. The isolate was from a very mixed catheter urine and I was expecting it to be an enterococcus. However, it turned out to be Lancefield Group B streptococci; another useful control organism and providing good practise for the local staff.

Ruth and Hilary returned to the UK after two weeks, but I could not have achieved the tremendous progress we have made without them, or without the generous contributions from the trade and local UK laboratories mentioned above. By the time I leave I fully expect the local staff to be able to run the microbiology lab on their own. I will only be a WhatsApp call away if they need any advice!”